As Bufkin, VerSteeg, and Brown-Boyd all graduated, GRC entered the season flying under the radar. I had them at #10 in the OK Conf. and their opponent South Christian at #8. GRC returned a decent amount of guys from last season, but those players' roles will be increased drastically this season. Delon McCloud took advantage of the opportunity scoring 21 points to lead the Eagles to a big home victory. GRC will have an extremely tough test on Friday in the rivalry game against defending D2 champion Catholic Central.

In the game of the night the Rams pulled out a huge road victory. Led by 14 points in the fourth quarter by Jack Lamancusa, Rockford was able to start what should be a memorable season.

Fennville entered the season as my #3 team in D3-D4 in Southwest Michigan returning several key players. Falling at home to a Kelloggsville team that won two games last season isn’t a good start.

Atwater entered the season as arguably the best player in the Wolverine Conference and got his season started with a bang. The Otsego senior did everything possible to ensure a victory going 12-15 from the free throw line including 10-12 down the stretch in the fourth quarter.

Scoring 16 points in a varsity debut isn’t very common, but as a freshman it is basically unheard of. Vis scored 16 for South Christian against a tough Grand Rapids Christian team. The Sailors came up just short of a victory, but they are a talented young team that will make some noise this season.

One of the better games in the Kalamazoo area featured two talented teams in Otsego and Portage Central. Otsego is led by senior guard Ashton Atwater while Portage Central has a trio of seniors in Grant Pikkaart, Caleb Johnson, and Will Juday. PC got off to a quick 9-6 lead early, but Otsego closed the quarter on a 17-2 run to take a 23-11 lead. Atwater had a quick 12 points in the first quarter on 4-7 shooting. Otsego led by ten 32-22 until Carsen Miller hit a buzzer beater three to give the Bulldogs a 13 point halftime lead. Portage Central’s Will Juday was held scoreless in the first half, but scored 6 points on 3-5 FG in the third quarter to help pull the Mustangs within 7 points 48-41. Portage Central trailed 58-46 with under four minutes remaining, but turnovers by Otsego led to a quick 9-0 run. It was a brand new ballgame with 1:58 remaining as Otsego led 58-55. Ashton Atwater was crucial at the free throw line for the Bulldogs going 10-12 in the fourth quarter to seal the victory. He led the Bulldogs with 34 points on 9-20 FG while going 12-15 from the free throw line. Junior big Cooper Smalldon added 12 points and junior sniper Carsen Miller had 10 points. Leading Portage Central was Caleb Johnson with 20 points while Grant Pikkaart had 9 points including some thunderous dunks. Otsego will host Dowagiac in their home opener on Friday while Portage Central will host Lakeshore. 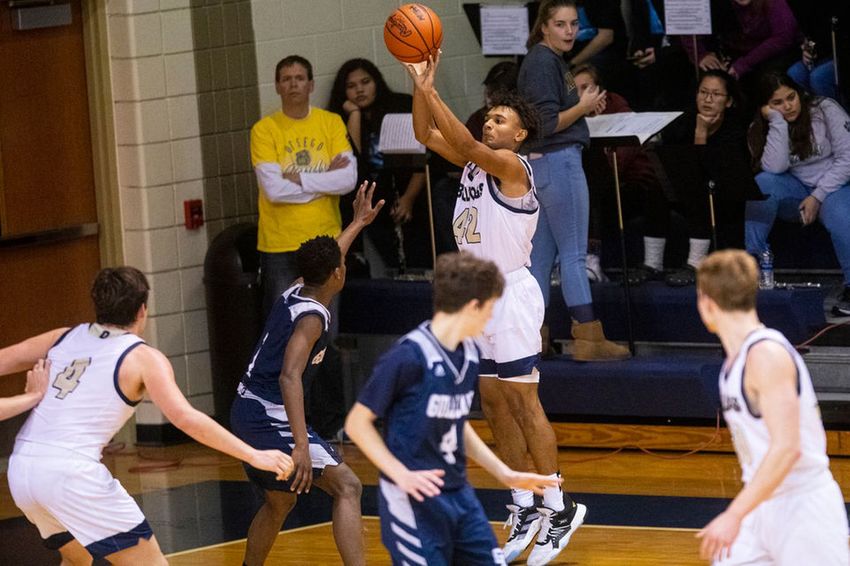