There were just a handful of games last night across West Michigan. Some ended up being closer than expected like Allendale holding off Wayland 54-47. White Pigeon was able to beat Bloomingdale 46-45. Lastly, Otsego defeated rival Plainwell 50-47. Sturgis, Paw Paw, and Allegan, all took care of business against inferior teams.

In the biggest Wolverine Conference game of the day the Eddies defeated Three Rivers by three points. Edwardsburg is sitting at (5-1) in conference tied at the top with Otsego who defeated them on Saturday.

The best scorer in the conference excelled last night against Dowagiac. Sturgis has now won four straight games after dropping two of their first three. They will head to Paw Paw on Wednesday.

Last night all nine members of the Wolverine Conference were in action. (0-6) Vicksburg traveled to (5-4) Paw Paw for a rematch from less than two weeks ago. Paw Paw won the first meeting in a close battle 61-59. Tonight Vicksburg scored first and led 2-0 before Paw Paw went on a 13-0 run led by Mitchell Mason. Vicksburg did go on a run to start the second quarter cutting the deficit to 16-13 before Paw Paw’s Mason & Tate duo knocked down some more shots. By halftime Paw Paw held a 25-15 lead led by 16 first half points from Mitchell Mason. Mason did cool off in the second half only scoring 4 more points, but Finlay Tate picked things up scoring 10 points in the second half. Paw Paw held on to win 51-42 to improve their conference record to 3-3. The Red Wolves rebounded well tonight and had big games from their two stars Mitchell Mason (20 pts) and Finlay Tate (13 pts). Paw Paw did struggle in transition a few times with turnovers, but overall they played a solid game. Vicksburg really struggled to score throughout the game and lack a strong post presence. Senior G/F Parker Wilson did stand out scoring 11 points on 4-7 FG for Vicksburg. They will continue their search for their first win on Wednesday against Allegan while Paw Paw hosts Sturgis on Wednesday. 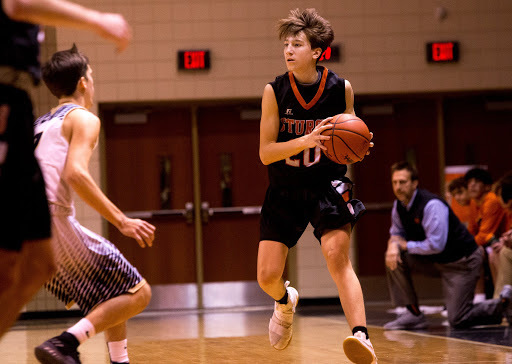