Goodrich may have taken their first loss of 2017 this past Friday to one of the league favorites, Lake Fenton 20-7, but it was definitely not like 2016 where the Goodrich Martians lost 40-0 to Lake Fenton and finished the year 0-9.

Goodrich 2018 LB/RB Drake Toms has been nothing shy of incredible so far as the senior recorded 21 tackles vs. Lake Fenton, 1 interception, and 1 rushing touchdown. Through 4 games; Toms has 43 tackles, 2 interceptions, and 2 touchdowns.

Toms commented on his productive day and how he was able to have it, "Having great teammates who I trust to turn the ball back to me and keeping linemen off me so I can fly to the ball."

Goodrich has had an increase in turnovers from last year, as a leader of the defense, Toms discussed their importance, "That's our job as staring defense is to get the ball back to the offense so they can score. Turnovers also energize team spirit so than can be vital to a game."

Toms experienced the lows of last year's 0-9 squad as a junior and is hungry in 2017 to have a better season, "The key was not to dwell on last year," said Toms. "That team is gone. This is a new team and we are using last season as motivation. Winning is great but it's not just due to the seniors it's thanks to the whole team. Unlike last year this years senior class has become a team with the underclassmen and we've all learned to trust each other to do your job. We expect nothing but the best from each other." 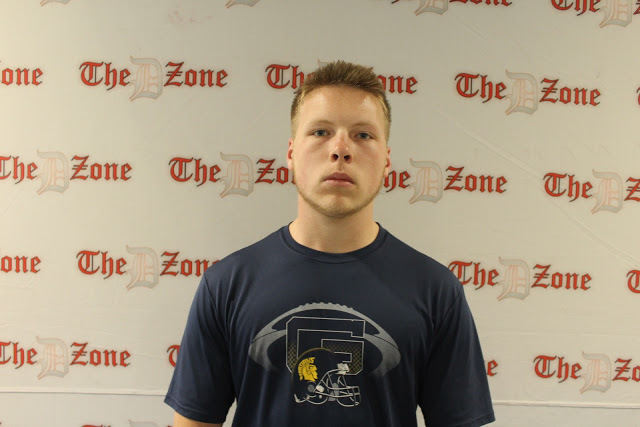