Arguably the best player in the state, Bufkin played well in a 68-44 win over Byron Center.

Towns is one of the best sophomores in the area and a major reason why I believe Godwin Heights is going to have a strong season. Tonight’s performance against a talented Tri-Unity Christian team proves Godwin is a team to look out for.

In a big-time game in the OK Red Grand Haven was able to top West Ottawa. Nic Stump led with 18 points and Harrison Sorrelle added 14 points and 9 rebounds. This was a big win for Grand Haven in the quest for the OK Red title.

Benton Harbor came into the season with not as much buzz around them due to the loss of Carlos Johnson and several other seniors like Quindarius Davis. Kentrell Pullian is the man this season for the Tigers and proved that with a big three pointer to knock off Muskegon.

Going into the night this was the best game in the Kalamazoo area. Both teams came in highly regarded among the media. Gull Lake was coming off a 17 point loss to a very solid Rockford team on Tuesday. Tonight’s game got off to a slow start but Gull Lake forward Haidyn Garrison drew three fouls in the first quarter converting 4-6 free throws giving Gull Lake a 13-7 lead after Q1. Going into halftime Gull Lake extended their lead to 27-16 thanks to a couple of buckets from John Stage and Caleb Taylor. K-Central really struggled to score in the third quarter only making three shots as the game got out of hand quickly. One main takeaway from the game was K-Central could not shoot the three. The loss of Trevon Gunter really hurt the Maroon Giants going 1-15 from 3PT range. Thomas Dillard was the only bright spot tonight scoring 18 points in the loss. Gull Lake was led by Caleb Taylor with 18 points while Tyler Corstange and John Stage each chipped in 10 points. K-Central will have another tough game on Monday vs. Benton Harbor. 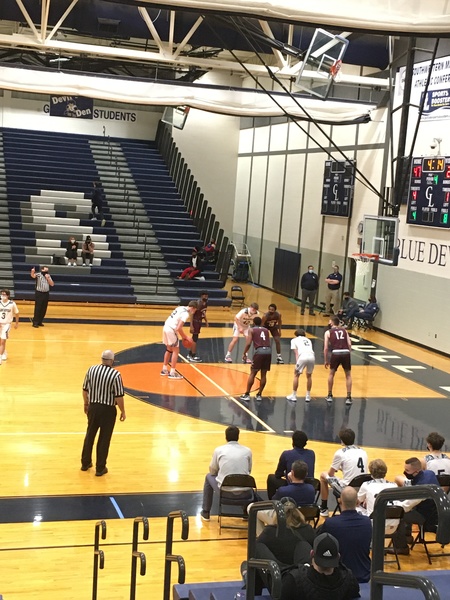